My head is spinning and my curiosity is piqued after an enlightening dialogue about America’s food supply.  I was invited to hear a pair of speakers this week who are taking on the food industry and attempting to transform the country’s food supply, for the sake of Americans’ health, our health care industry, and our economy.  To them, where our food comes from and what it’s made of is the key to changing everything, really.  At first I didn’t see the connections.  They opened my eyes.  And I commend them for tackling such a colossal task.  It’s not going to be easy. 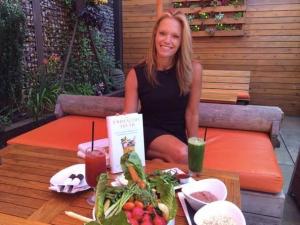 A trail-blazing restaurant in Cleveland, Town Hall, was behind the evening.  The restaurant is the only one in the city to be able to call itself a non-GMO establishment.  “What’s that?”  I said when I first read about it.  I had no idea, and I’m not alone.  GMO stands for genetically modified organisms. It’s food engineered to withstand direct application of herbicide and/or to produce an insecticide.  Also refers to animals who eat this stuff, and who have been pumped full of hormones.  Not too appetizing, right??  Turns out most of us are consuming them on a daily basis, whether we know it or not.  And Robyn O’Brien believes they are making us sick, causing the exploding epidemic of childhood allergies, contributing to the rise in asthma, and controlling the country’s food supply.  When I started reading her book, The Unhealthy Truth, I was both sacred and intrigued.  The journalist in me was hungry for more information to make up my own my and start making better informed decisions for my family.  So I gladly accepted the invitation to hear what she had uncovered and listen to what the other featured speaker of the night, U.S. Congressman Tim Ryan was going to do about it. 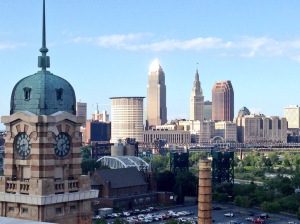 The stage was set for an eye-opening conversation, at the penthouse suite of Skylight Financial.  It wasn’t a coincidence that we were sitting directly across the street from the iconic West Side Market, a mecca of fresh produce, meats, and cheeses.  I’d never seen my city from this vantage point before.  And until this night, I’d never looked my food from this angle either.

Congressman Ryan has also written a book on the subject, The Real Food Revolution: Healthy Eating, Green Groceries and the Return of the American Family Farm.  He began by saying how great it was to work with people who are open-minded enough to hear the truth.  I agree.  Reflecting on his own childhood culture of family dinners, and eating things straight from his grandmother’s garden, he expressed disappointment that we are so very disconnected from our food.  Ryan believes we are a product of an unhealthy industrial agriculture system.  What was equally disappointing to him, was that in all the discussions Congress had about Healthcare, no one talked about food.  And in all the discussions about the latest Farm Bill, no one talked about Healthcare.  To him, they’re all connected. 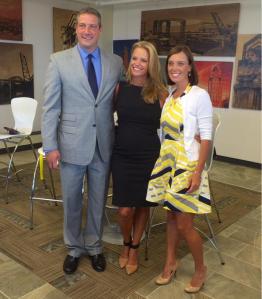 Ryan wants to create an entirely new food system, and fix healthcare, the environment and education through food.  Ambitious indeed.  He’d like to shift subsidies to give farmers incentive to generate more fresh produce and whole foods, then help them sell it by creating a market.  (For example, gradually increase the percentage of better food bought and served by publicly funded universities and jails). 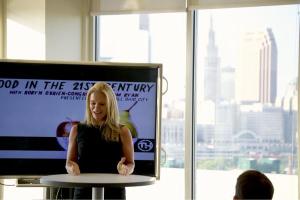 Robyn O’Brien became a “food detective” and activist after her 1-year-old daughter (the youngest of four) had a severe allergic reaction to an egg.  Since then she has dedicated her life to uncovering the root causes behind the exploding childhood allergy epidemic, long-term and wide spread health issues linked to GMO’s, and the incestuous relationship between the food industry, chemical corporations, political leaders and even non-profits when it comes to food safety.  As a former financial analyst, she did it in a way she knows how, through financial records and through tapping into her “type A” personality.  She connected the dots between major corporations like Kraft, and Monsanto (the chemical manufacturer that makes Round-Up), as well as ties to non-profits and studies on the subject.  Disappointing and scary stuff.

Admittedly, she used to dismiss this movement as a hobby.  Gotta say, I used to as well.

I didn’t want anybody telling me to feed my kids organic avocados,” she said.

But once she started to dig, she could no longer look at it that way, or ignore was she was discovering.  According to her research, from 1997-2002 the number of peanut allergies doubled.  There had to be something to it, she decided.

She is known as “Food’s Erin Brokovich” and I can see why.  During Q&A she shared some of the ways in which big corporations attempted to silence her in her outreach.  “Courage is contagious,” she reflected.  Her mantra.

She never referred to notes during her talk.  She was soft spoken, even seemed to be on the verge of tears at times.  Yet she spoke with such confidence about what was wrong with the system and what needed to be done to undo the damage. (for example, make it cheaper and easier for farmers to grow organic food)  O’Brien is encouraging the country to start by having a conversation, writing to your congressman, and making different choices at the grocery store.

“We have financed a chemically-intensive system,” she said.

O’Brien also recognizes the fix won’t be quick, or remotely easy.  And figures she’ll still be fighting this fight when she’s got a silver ponytail.  I have to agree with her.  Changing people’s minds is tough enough.  Changing the political system will be an incredible challenge.  And changing the economics behind it all…that seems near impossible to me.  Not to her, and not to the others who came to hear her speak.  I can’t wait to see, and eat, the progress.

O’Brien wrote about her experience in Cleveland.  Click here to read her thoughts.