If chefs are the new rock stars, then cooking at the James Beard House in New York City is like headlining at the Rock and Roll Hall of Fame. It’s a pretty big deal. And who better to rock the house at the famed Big Apple dining room, then a group of chefs from the rock and roll capital of America?  After all, the inspiration for the invitation to JBH was the celebrated Cleveland dining experience, Dinner in the Dark, which is described by its founders as an “open mic jam session for chefs.”

Eight talented local chefs, traveled to New York to eat their way through the city and cook the meal of their lives.  I think they’re still in a food coma, and still inspired by their collective experience.  Brian Okin (of Cork & Cleaver and Graffiti Social Kitchens and Dinner in the Dark), Adam Bostwick (of Cork & Cleaver and Graffiti Social Kitchens), Karen Small (of Flying Fig), Anthony Scolaro (111 Bistro), Jim Blevins (Butcher and The Brewer) Britt-Marie Culey (of Coquette Patisserie) Jeff Jarrett (of Dinner in the Dark) and Chris Kafcsak (of Deagan’s Kitchen) all joined forces last week to prepare a meal for 70 people.  But it wasn’t just any meal.  This one means more than most for this group.

James Beard was a cookbook author, teacher and mentor to countless American chefs.
His old brown stone was transformed and memorialized and now serves as a restaurant where chefs are invited to cook. Profits from the dinners hosted at the house all go to fund the James Beard Foundation which gives scholarships to young cooking professionals. 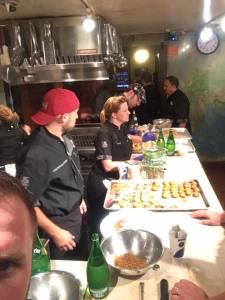 “It’s very humbling to be given the opportunity to cook there. With the amount of names that have cooked in that kitchen to be able to cook there and walk in those footsteps is truly inspiring,” said Chef Scolaro.
“After leaving I felt inspired to continue to cook great food and work harder to do it,” he said. 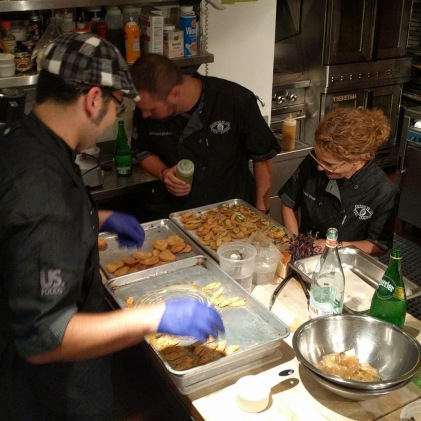 Members of the group say getting the opportunity  to cook there validates Cleveland as a culinary player, and destination.  They worked to keep the menu as Ohio focused as possible. Everybody brought their own product, giving them a chance to highlight their favorite producers and ingredients.

“Honey rock melon was the first think that came to my mind.  The fruit is so good in taste, texture, and smell.  I remembered them from days at the Northern Ohio Food Terminal with my family.  I also wanted to showcase items that people are not familiar with in Ohio like, farm raised salmon.  Most people do not even know Ohio is producing some farm raised fish,” said Chef Kafcsak. 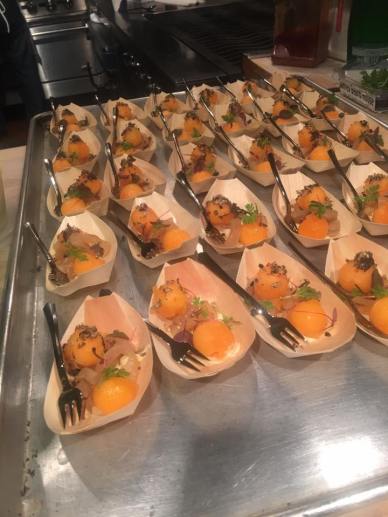 The group had only great things to say about the company they kept, calories they consumed without thinking twice, relationships they built, and inspiration they got out of the experience.

“We passed the food around and ate off the same plates. It was if we were a tight European family having our regular dinner together. Some people didn’t know each other before the trip, some knew each other very well. There was no rush to eat and go, we went to the restaurant and we left when we were good and ready,” Okin said. 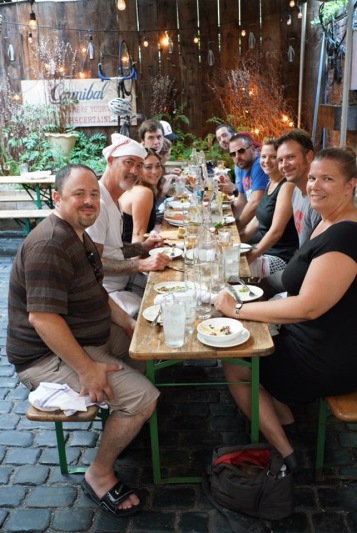 The chefs tell me many of their 70 diners at the Beard House say the meal exceeded their expectations.  The diners saw an Ohio themed menu and may have expected to be more rustic or down home, but what they ate was refined and elegant and representative of what Ohio and Cleveland have to offer.

“After leaving, I want to keep focusing on what I am doing and it added fuel to the fire of my drive to cook.  It was a great experience,” said Kafcsak.

The next Dinner in the Dark is September 12th and it’s already sold out.  And no doubt, this experience has helped with regional and national exposure….not to mention how it’s  cemented some life long friendship formed at dinner tables far from home.

Click here for Chef Karen Small’s recipe for the local corn andouille spoonbread she made for this dinner.

The photos in this post are courtesy the Facebook pages of the chefs involved in the Dinner in the Dark night at the James Beard House.