My friends always ask: “How do you just look into the fridge and know what to do with random ingredients?” Answer: I brainstorm.  I investigate.  I experiment.  And the people who eat at my table eat better because of that.  This week I made a series of #Cheftovers dishes with all kinds of stuff I had in the form of leftovers or extra ingredients.

Now, I don’t profess to be an experienced recipe developer.  I do what I can to share what I am doing, or have done, with specific ingredients.  But the inherent nature of leftovers is that no one household is going to have the same ingredients (of leftovers) so it’s hard for me to share or spread “recipes.” I prefer to share ideas, and inspiration.  So in that spirit, here is what I did this week:

I roasted a whole chicken and prepared stuffing (confession: it was boxed and I’m not ashamed).  Needless to say, in a household of two adults, a whole chicken and a whole recipe of stuffing left us with excess.  I took the extra stuffing and added a beaten egg and pressed it into a small tart pan (no reason you couldn’t use a pie pan on a larger scale) then baked it for a while for a crust.

﻿
Then I combined beaten eggs and a hodge podge of what I had around (shallots, zucchini, and some of that roasted chicken) and poured it into the “crust.” I topped it with a little bit of shredded cheese and baked it until the egg was firm.  Boom. “Dinner Quiche-ish.”

Hands down, my hubby’s favorite meal I make is bruchetta and spaghetti carbonara.  Made that Sunday.  But there was leftover bruschetta.  Shocking, I know.  I immediately thought of panzanella. 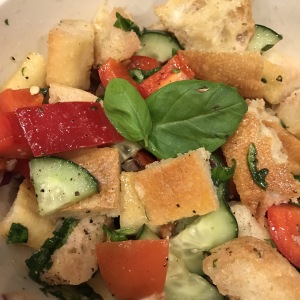 It’s a bread salad of sorts using stale bread, basil, tomato, red onion and red pepper (which I already had on hand because I made chicken cacciatore over the weekend too) I chopped up the leftovers and looked up a couple of recipes online to see if I was missing anything. But it was super easy and super fresh, despite may use of leftovers. 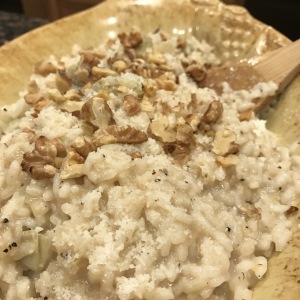 Risotto is one of my favorite go-to dinners, because you can play around with it, kind of like a canvas.  I made a nice lemon and artichoke risotto, a hit with both my kids and my husband. But again, there was more than we needed.  So I thought of arancini.  Essentially they are fried rice balls. Now do I have our attention?  I took leftover risotto, mixed in a little grated cheese and a beaten egg, rolled them into balls and coated them in bread crumbs to fry them up.  Mic, dropped.

Now to dessert.  It doesn’t matter what day of the week it is, I am up early and thinking about what I am going to do, and cook.  When I wake up on a weekend, I usually put on Food Network to get inspired.  I landed on a nice episode of “Southern at Heart,” with Damaris Phillips, who I had the chance to meet at this year’s Fabulous Food Show. 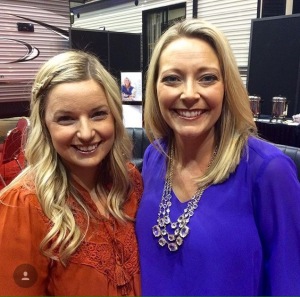 She was making a picnic for $30 date and prepared chocolate mason jars. I thought, “I can do that !” And I had some leftover eggnog in the fridge (yes, it’s still in stores, it is not a month old!) Instead of whole milk, I used the egg nog.  And I’ll be honest…it was kinda genius.  Just for show, I crumbled a little of the Rice Krispie treats my kids asked me to make that same day, and topped it with a chocolate covered almond.  And it was spectacular.  And easy.  And quick. And delicious. 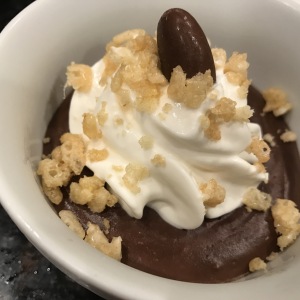 The moral of the leftover story is, you have more around than you realize.  More potential and more deliciousness.  You just need to get adventurous!  And get to sharing.  Tell me what you’re doing with your leftovers.

One thought on “My week in leftovers. Dinner, a side, a salad and dessert with my leftovers. ”