Come Valentines Day, sweets are on the brain.  Chocolate to be more specific.  I was invited to Urban Farmer to attend a pastry class, conducted by their pastry chef.  I didn’t know what to expect…baking pies, kneading dough, etc.  When we arrived at the conference room turned classroom, we found three layers of decadent chocolate cakes, a pastry bag full of Italian butter cream, and another one nearby stuffed with chocolate mousse filling.  Jackpot.  This was a cake decorating class!

My friend Amanda and I inspected all the tools placed in front on us and thought…this will be equal parts fun and disastrous.  After all, neither of us claim to be bakers.  That’s the whole reason we were attending this class in the first place.  But we both fancy ourselves pretty savvy in the kitchen.  Adventurous, at least.  But we were still glad to see the tasks of actually baking the cakes and preparing the frosting and filling were left to the professionals. We were just left to do the fun creative stuff.

We were given instructions on how to best cut, stack and prep a layer cake  (along with the recipe for it), and let in on an industry secret…of brushing the layers of cake with flavored simple syrup, to add flavor and keep it moist.  For this cake we used a coffee flavored simple syrup (equal parts sugar and water, heated until dissolved and 2 oz. brewed coffee to roughly 2 cups of syrup.  Game.  Changer. 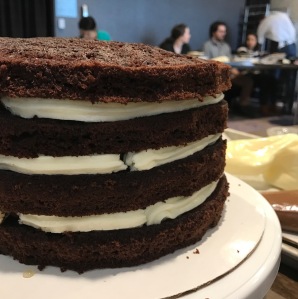 We piped a “barrier layer” of frosting on the outer edge of each layer, then filled in the rest with the chocolate mousse filling. Ideally you’d throw the cake in the freezer after each step, but in this instance…no time.  Next came the crumb coat.  That luscious Italian butter cream. 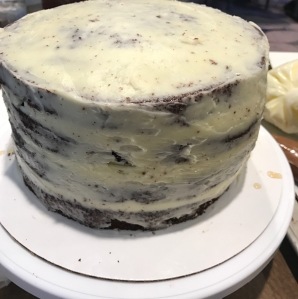 We were also invited to to sample and taste the difference between store bought frosting (generic and organic), the grocery store variety used by bakeries like Giant Eagle and Costco, and the house Italian butter cream used by Urban Farmer in the restaurant and attached Westin Hotel.  To me the last was clearly the best. Rich, creamy, velvety.  The kind of frosting you do extra time on treadmill for. 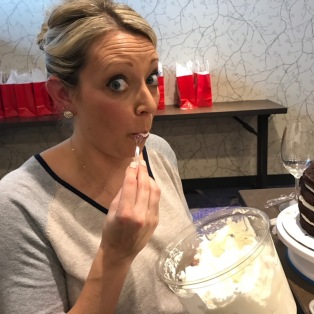 The next part got a little tricky.  We frosted the top and the side, then were tasked with make the cakes smooth, real smooth…with the offset spatula and a painters tool.  I nearly broke my arm patting myself on the back after I conquered this step.  Ironically, all the time and attention I spent on it wasn’t totally necessary, as I covered most of the surfaces with decorative frosting, sprinkles and Oreo crumbs.  Yep…those came next.

When it was time to move on to the REALLY fun part (also the most challenging) we were like kids in a candy store.  We had cake pops, tubs of every color sprinkle in the rainbow, merengue “eyes,” swirls, and dots, pretzel and almond crumbs, Oreos, and gallons and gallons of frosting.  My trouble shooting takeaway? Frosting fixes everything. Recognizing my frosting shortfalls, I went wacky instead of precise…and went for a “Love Bug” theme for my little girls. Others made “monsters” or flowers with frosting.  It was cute to see everyone’s imagination run wild!

At the end of the fun afternoon, we were sent off with our cakes, and a gift bag with four recipes used by the Urban Farmer pastry chefs, and several baking tools.  Best part for me…is I’ll be back for more classes at Urban Farmer. They’ve scheduled a series of butcher classes from April to October.  You can sign up for one, or all of them.  I’ll see you there!