When your favorite football team is as terrible as ours, it’s best to make tailgating the “main event” of game day.  So we had a dozen or so people over for an at-home tailgate party before watching the Browns game.  After everyone went home, and the dishes were done, it was time to assess the leftovers. 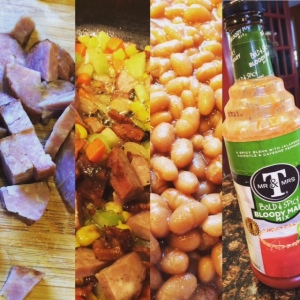 Hmmm….a couple of brats, a ton of baked beans, the remnants of a veggie tray, burger fixins’ and a lot of Bloody Mary supplies.  (no beer..that we drank every last drop of to drown our sorrows) 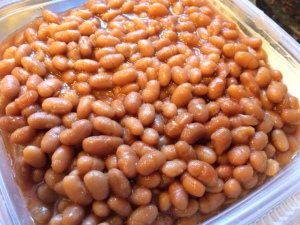 Given the volume of baked beans which are not something we eat a lot of in our house…I decided to incorporate those into a soup because I know my daughter, Julia, will slurp it up!  Go time.

I started by cutting up two slices of peppered bacon (from the very elaborate Bloody Mary bar a guest came with!) Once I fried those up in a small stock pot, I added some chopped onions (red and white, but you could use whatever you’ve got) leftover from the burger toppings platter, and let those soften.  To that I added chopped celery and carrot (probably the equivalent of one carrot and one stalk of celery) and cooked on a medium high until those too were soft (just 3-4 minutes).

(I added corn to this original batch because I had some around and thought it would be good for color.  I think it enhanced the soup, but it’s not necessary) 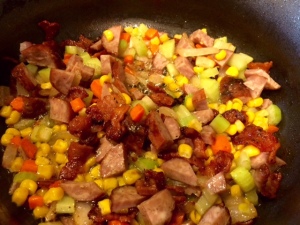 I sliced up one bratwurst into bite sized pieces and dumped that in to the mixture, along with 2 cups of beef broth.  Once that was brought to a boil, I added 1 cup of baked beans, and 1/2 cup of Bloody Mary mix.  Given the contents (peppered bacon, seasoned beans, and the drink mix) I went easy on the salt and pepper, but do it to your taste.  I also added dash of hot sauce.

Let that magic simmer for about 25 minutes and you’ve got yourself a soup that will fill your belly and keep you satisfied through Monday Night Football.

This is about the time of the holiday season when I’m just not in the mood to make much of anything for weekday meals.  My kitchen creativity is tapped out on Christmas cookies and multiple rounds holiday party appetizers I have to prepare.  During this spell, meatloaf is one of the go-to dinners I make and have ready for a work night meal.  With only two adults in our house who sit down to eat a proper portion, that means leftovers.  I took a long look at the hunk of meatloaf remaining, and the potatoes I found still lingering from a crock pot meal I’d made earlier in the week…and I decided to try something I’d never made before….Shepherd’s Pie.

I started by locating and chopping some veggies I’d use to supplement the meat: carrots, onions, and some baby bella mushrooms.

I also grabbed some frozen peas, something I always have around (see my Pantry Must-Haves post)  I sauteed those, then added the meatloaf and broke it up in the pan, only adding a little seasoning to the veggies as the meat had already been seasoned.

From there I went to work on the topping, a mashed potato of sorts.  Now, because I have never made shepherd’s pie before, I did consult a couple of recipes to make sure I was on the right track, and I was.  So I took the leftover cooked potatoes from my previous dish, and mixed those up with some sour cream and heavy cream (also leftover from a recipe.  It seems that recipes always call for half a cup of the stuff, when the smallest carton usually contains about a cup)  I suppose you could use milk here too.  I used a hand mixer to get it nice and smooth and seasoned it with salt and pepper.

The last component I needed to figure out was the gravy.  So I went with what I know.  Start with some butter, whisk in some flour, then I added beef broth and, after consulting with some other shepherd’s pie recipes, I added a little bit of Worcestershire sauce and some pepper.  I let all those elements hang out until I like the consistency, took a taste….and I was satisfied.  I mixed the meat and veggies with the gravy and poured portions into some medium sized ramekins.  Since I was dealing with leftover portions of both the meat and the potatoes, there wasn’t enough for the traditional portion in a baking dish.  But I’ve found these ramekins I bought recently have been very useful in situations like this. 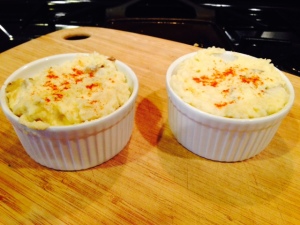 I spread the whipped potatoes on top of the meat/veggies/gravy and sprinkled a little paprika on there for color.  Since everything was cooked already and the portions were not terribly big, I decided to broil them on high until the top looked golden brown.  But if you were making these ahead and were refrigerating them, I would bring them up to room temp, or throw them in the oven first before broiling so it’s warm throughout.

I got four portions of “Shhhheperd’s Pie” from only about a 3-4 inch slice of meatloaf and a handful of leftover potatoes.  This will surely become a new “go-to” meal with any sort of leftover ground meat.

Please share some of your short-cuts and secrets to getting dinner on the table during the busiest time of year.  I could use them!

As soon as we turn the calendar page to November, we cooking and hosting enthusiasts already begin to think Thanksgiving.  I’m hosting a “Friendsgiving” this weekend, celebrating our bountiful blessings with some of our closest friends.  But when I took a look in my fridge, I realized there wasn’t much room for what I had planned.

I took stock of my fridge, freezer and pantry and got to brainstorming.  (sidebar…also beginning to question why I have things like cocktail onions and candy leftover from Easter still in there)

I uncovered a lonely frozen filet mignon.  Easy to make that the jumping off point for my dish.  It’s clearly not enough for more than one person though….best to keep digging.  I also discovered half a bag of frozen peas, a handful of fresh green beans, and some crescent rolls I forgot I’d bought.  First thing I thought of was a beef pot pie.  Easy comfort food.

I seasoned the beef with some onion powder, garlic powder, salt and pepper and seared it in a pan.  While that was cooking I sliced up some onion and garlic (two staples of any cook’s produce drawer) and I found some sliced mushrooms in the pantry, and reached for something else I always keep handy, beef broth.  This dish was starting to come together.

After I let the meat rest for a bit, I sliced it up into cubes.  Then, in the same pan that I seared the beef, I added a little olive oil and cooked the onions and garlic together.  Once they were sweating in there, I tossed in the green beans to soften a bit, and then the mushrooms.  (carrots would be good in here too, even asparagus if you have some of that sittin’ around)  I mixed the meat with the veggies, and added some peas.  Now, it was time to get to work on a sauce.

I melted a couple of tablespoons of butter and added an equal amount of flour, and quickly whisked it together to create a roux.  Then I poured in, still whisking quickly, a few cups of beef broth.  I left it on the stove at a medium heat until it thickened up.  Then I seasoned it.  Use what you like, or what you’ve got.

After I added the sauce to the meat and veggies it was time to get creative with my construction, since I didn’t have enough filling for a traditional pot pie or a standard pie crust.  I placed some baking cups in a cupcake tin, and opened up the crescent rolls.  I filled each baking cup with the meat/veggie mixture.  Then I rolled the triangle-shaped crescent rolls into a ball and flattened them out…making mini-pot pie crusts.  I baked my adorable little pot pies at 400 degrees for about 17 minutes. 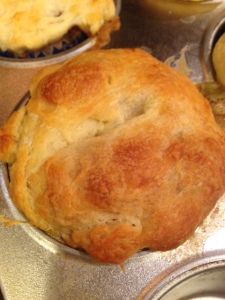 By dinner time I had a nice meal, and bonus: by using up a couple of canned goods, a few items out of the freezer and the remainder of some of the veggies in my produce drawer, I created some much-needed space in my kitchen before I begin prep for “Friendsgiving!”

(Confession: the baking cups don’t help keep it together, only made clean-up easier.  This won’t be pretty when you attempt to scoop it out of the cupcake tins, but it’s still tasty.)

What have you unearthed in your fridge/freezer/pantry that you’d like to use up before the most important meal of the year?