What is it they say at the beginning of an Iron Chef competition? “So now America, with an open heart and an empty stomach, I say unto you in the words of my uncle: ‘Allez cuisine!'”  The phrase calls the chefs to the culinary battle.  And what a battle it was at the Marriott International Cooksmart Culinary Challenge. 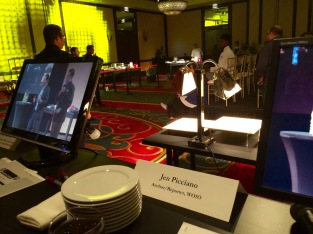 I felt like a distinguished Food Network judge (along side Eric Williams and Tricia Chaves), sitting atop an elevated stage, ready to sample the hard work of up and coming sous chefs from Marriott properties all around the region. 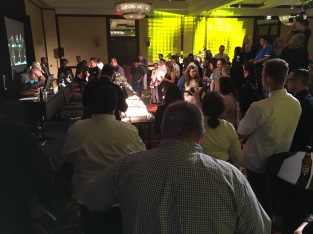 I thought I’d be walking in to a generic corporate ballroom modestly put together to accommodate the competition.  But I grossly underestimated the production value of this event!  There was staging, and lighting and music, a live video feed of the action on large screens (thanks to Rock the House), and a real Iron Chef America Judge, Mario Rizzotti.

Eight talented and up and coming Marriott chefs advanced from hotel-level cook-offs, to compete here.  These are hourly associates and supervising chefs, at the top of their game.  They were tasked with a pretty daunting challenge: make something delicious, in 45 minutes, incorporating four mystery ingredients.  Those were lamb liver, monk fish, pickled green tomatoes and coffee.  I don’t know about you, but those don’t sound like an appealing group of ingredients to me.

When the clock started, the judges were encouraged to walk around the room, not only to chat up the chefs about what they were making, but also to take notes on how they kept their stations.  In previous competitions I’ve judged, we been tasked with ranking them from 1-5 or 1-10 in categories like taste, texture, presentation, etc.  But in this competition the scoring was far more intense, and including things like mise en place and sanitation. 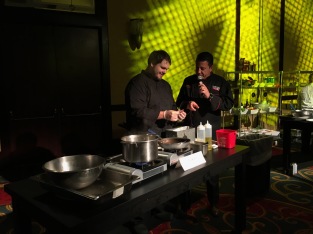 And as if the pressure wasn’t intense enough, Mario was walking around the room interviewing the chefs as they were working.  But everybody seemed to handle the pressure like champs.  When the clock wound down, the chefs presented their dishes on stage and explained how they incorporated all these seemingly incompatible ingredients. 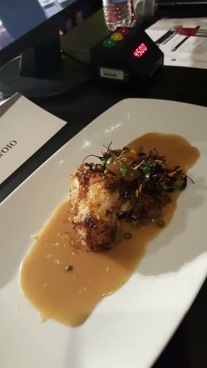 Most admitted they’d never worked with liver before and struggled with the cook on it.  But some used it wisely and flavored things like gravy, sauce or couscous with the sometimes off-putting protein.

When the scores were tallied, it was a unanimous decision to crown Courtney Nielsen, of the Renaissance Hotel in Columbus, as the victor.  She cleverly made a spin on dirty rice with the liver, made coffee and used it for the liquid, pan seared the monk fish and whipped up a pickled veg salad.  To me, it was the most harmonious off all the entries.

As the winner, she’ll be sent to Marriott HQ and test kitchen in Washington D.C. where she’ll get to rub elbows with corporate chefs and VIPs.  The brass behind this event say it was created to recognize their young talent and support sous chefs and cooks who do a lot of the heavy lifting in the kitchens of their properties, and while it’s only regional for now, they expect this Farm to Fork Culinary Challenge to be a national event come next year.

What an honor it was to serve on this panel (get my first….and second-eighth tastes of lamb liver!) and help support talented, creative people like these chefs.  They rose to the challenge.  Days later, I still can’t imagine what I would have done with a mystery basket like the one they were presented with.  What would you have made?

The Fabulous Food Show is indeed that, a fabulous celebration of good food, celebrity chefs and innovative vendors.  It was an incredibly busy week for me, making good use of time and access to some big players.

I got some one on one time with Cleveland’s own Iron Chef, and cast member of The Chew, Michael Symon.  We chatted about how the food show is evolving, his new cookbook (5 in 5 For Every Season) what Cleveland needs to do to continue its trajectory into the upper echelon of the food world, and spoke about the long-awaited Mabel’s, (a sore subject!) Symon’s East 4th St. barbecue joint.  He tells me it is about a year behind schedule and way over budget, but yet still on track to fill a void in the local food scene.  This will mark his 12th restaurant-he has 8 B Spot locations, Lola Bistro, Lolita, Roast (plus 2 Bar Symon locations)  The man is busy but still as gracious, and down to earth as you’d expect.

I was also an honorary table host at the Cleveland Culinary Awards Gala, which recognized industry leaders and icons.

I was treated to a four course meal and the company of some of the most creative and delicious dinner companions I could dream up.

The “main event” of the weekend for me was a Media Cooking Competition on the main stage, pitting WDOK 102.1 FM personality, Jeremiah Widmer and Chef Matt Fish, of Melt Bar and Grilled against me and Chef Matt Mytro from Flour Restaurant. 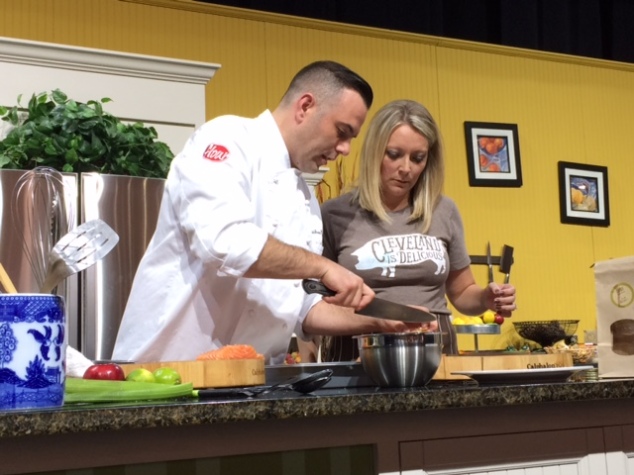 We were given a surprise “main ingredient” to work with, salmon, plus access to anything in the main stage pantry and fridges.  Which, if I’m being honest, was pretty meager.  It was the last cooking event of the last day of the show.  The cupboards were awfully bare. 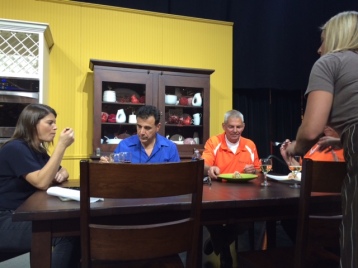 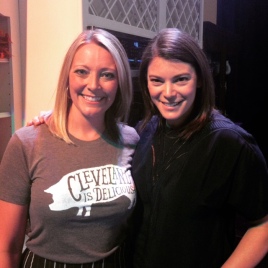 The pressure was on.  The judges were Gail Simmons of Bravo TV’s Top Chef, Food Author and Host, Mark Decarlo plus newly minted judges from the World Food Championships.

We had 30 minutes.  The instructions from my partner, “stay busy and entertain the crowd.”  I did my best to assist in our salmon poached in chili oil, with a butternut squash puree and creamy apple/celery slaw… including trying to distract our competitors, and bribing our judges with ice cream. 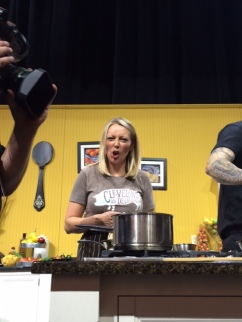 When time was up, we tasted everything we’d made (the most important key to good cooking according to Mytro) and presented it proudly to the judges. 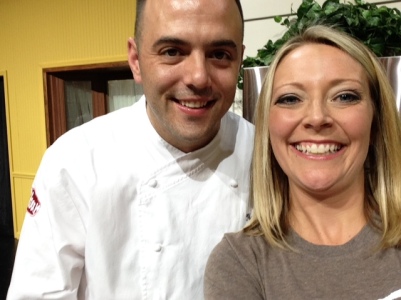 In the end, team “Euctownninjas” (we’re both from Euclid) came up short.  But even as the loser, I still feel pretty good because I have to pay up on a bet I made with Jeremiah, and participate in their station’s annual charity radioathon, benefitting  UH’s Rainbow Babies and Childrens Hospital. 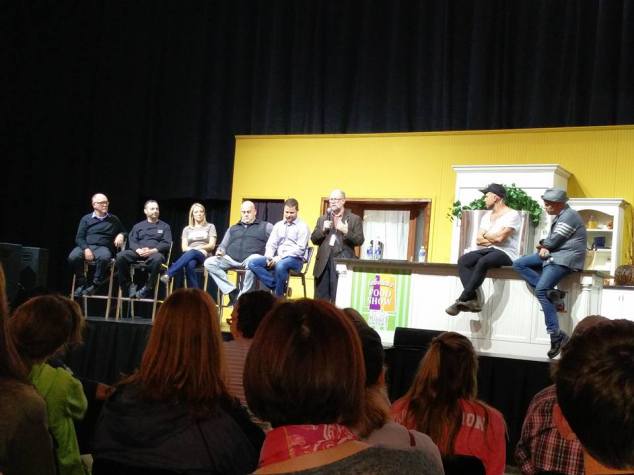 To cap off a very busy and productive couple of days, I was invited to participate in a panel discussion about the Cleveland culinary scene.  I got to sit alongside Chefs Michael Symon, Chris Hodgson, Jason Roberts, Izzy Schachner and Rocco Whalen to talk about what the city is doing right, what challenges they’re facing as restaurateurs and what they’d like see next for the local food scene.

After an eventful week filled with such incredible and talented people , I’m exhausted and hungry for more involvement in the local food scene and beyond.  Look out, world.