I am so excited and encouraged by what is happening in the East Bank of The Flats right now.  There is energy again.  There is activity again.

Since late July, I’ve been down at the revitalized riverfront pretty frequently, attending launch parties, grand openings, and checking in on the progress of those tenants still in the works.  The developer, Fairmount Properties, did a fantastic job bringing in businesses that are just plain cool.  Punch Bowl Social is the latest to swing its doors open and welcome all the Clevelanders and visitors who are eager to enjoy what’s developing down there.

The newest neighbor, Punch Bowl Social, is a “gastro diner” with items made from scratch on its extensive menu. 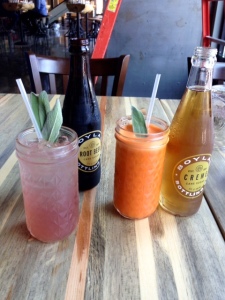 What sounds like fun to me is all the games and entertainment they have to offer.

Shuffleboard, ping pong, private karoake, old school arcade games.  I can already imagine rounding up a group for a game night, especially during those long winter months when you’ve got a wicked case of cabin fever.

My husband and I couldn’t resist the chance for a rematch after last weekend’s round at the grand re-opening at The Corner Alley.  So we laced up some rental shoes and played a couple frames on their boutique bowling lanes.

The adjacent lounge areas are modern and inviting.  Not your grandma’s bowling alley.

During the VIP party we attended, scores of their 275 employees passed around samples of their signature punches, house wine and local beers.  They also offered great small bites, like sliders, avocado toasts, and my favorite, crostini with jalapeno spread and pickled grapes. 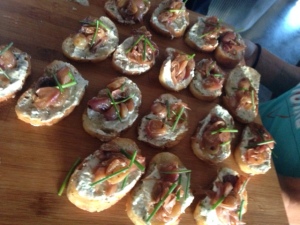 The staff was ample, welcoming and extremely attentive.  They looked like they were having a good time too!

There was a great turnout for the VIP portion of the evening, and when we left, there was a line out the door for the grand opening party for the public.

The food was carefully crafted and tasty.  The drinks were on point.  And the games offer an element of entertainment that you haven’t seen in the Flats East for decades.  Game on!