I’ll be the first to tell you I’m not a baker.  Yeast intimidates me.  And I don’t own a KitchenAid stand mixer.  I sincerely appreciate those who are good with dough, batters and the like.  So I value good family-run businesses, like Orlando Baking Company, which cranks out quality breads and dough for remedial bakers like myself to cook with (and sometimes pass off as my own).

For this Cheftovers installment, I’ve teamed up with Orlando Baking Company (http://www.orlandobaking.com/) to review two of their newest offerings.  This is not a paid endorsement, I’m simply taking them up on no-obligation invitation to try out a couple of things they’ve just introduced to the market.

You can find both of their latest products in the freezer section.  They now sell frozen ciabatta dough (a variety of bread they’re known for) and frozen pepperoni rolls.

I was pleased to discover upon opening the box of pepperoni rolls, that they are packaged in four separate rolls.  (This Cheftovers queen just hates wasting half a loaf of garlic bread because I have to cook the whole thing for just a couple of us.)  This allowed me to pop one or two in the oven at a time to test them out.  I also saw that they were fully cooked, so if you want to take one of these on the go, they’ll thaw nicely and you can eat it cold. However, I wanted mine hot. So I popped a pair in the oven and baked them according to the directions on the box.

For me, that wasn’t nearly enough time.  If you’re looking for melty cheese on the inside, you’ll probably want to leave them in at least three more minutes than the box suggests.  But that’s a matter of preference.  Same goes for a little marinara sauce.  I would love to the see the box come with a container of marinara sauce to dip it in.  Adding pepperoncini might be a nice touch too, but those aren’t for everybody.

For the sake of variety, I tried one in the toaster oven. (especially since it wasn’t a whole loaf and I didn’t need to fire up the big oven)  It was nice and crispy on the outside, chewy on the inside, just as it should be.

Overall, I think this is a quality product.  They’re the perfect size and shape for my little Italian-at-heart daughters to nibble on when dinner isn’t quite done yet.  And I would proudly serve these to guests an appetizer or a party snack.

For the ciabatta dough, I took it out of the oven and brought it up to room temperature, per instructions on the packaging.  I certainly want to respect the artisan dough that it is!  Once it was room temp, I also brushed it with oil as recommended.  However, I don’t have a pizza pan to bake it in like the instructions suggested, only a pizza stone (which to be effective should be heated in the oven first…and I couldn’t work the dough and add the toppings that way) so I chose to work on a standard cookie sheet. 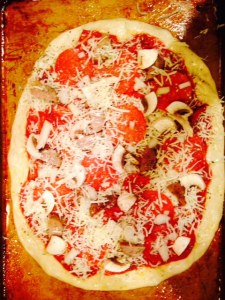 I worked the dough out into the size and shape I wanted, which wasn’t hard at all (don’t know why I’m so scared to work with dough sometimes–fear I’m going to screw it up I guess) Then I topped it with a layer of pizza sauce, pepperoni, mushrooms, and onion, along with some spices and plenty of mozzarella cheese.

I made sure the crust had a nice coating of olive oil on it along with a light sprinkle of garlic salt.  I baked it as suggested and it turned out beautifully. 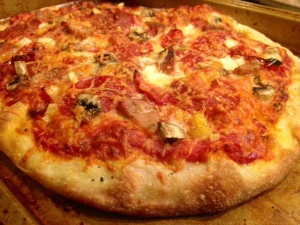 Nice and golden brown around the crust.  The outside was lightly crispy and the inside was chewy, just like I like my pizza and my ciabatta bread.  If you’re not too familiar with ciabatta, know that it isn’t going to be as light as other pizza dough.  I find it a little more dense, but I like it that way!

The frozen dough will run you about $2…a steal for the time and grief it will save you making your own, and less than other varieties of prepared pizza dough or crusts.  I bought the pepperoni rolls for about $6, which is also an inexpensive way out of a “I forgot we were supposed to bring something to the party” jam.

Both products are available at Heinen’s.  And the pepperoni rolls are also sold at Dave’s, Discount Drug Mart, Marc’s, and Zagara’s.